A special occasion on the horizon

The young Indian sitting opposite me, smartly dressed in suit and tie, was reading The Bible.

The older man to my right, with very dark skin and stubble to match, was dressed in a grubby t-shirt and jeans and was noisily sipping a Costa Coffee latte.

The woman to my left, dressed all in black, her eyes the only thing visible, was speaking sternly to a little boy in a bright yellow, quilted jacket who was squatting cross-legged at her feet.

Just a few metres away was a glittering array of quality stores. Milling around this ultra-modern, air-conditioned arena were hundreds of people of every shape, size and nationality.

We were all in the somewhat incongruous surroundings of the new Indira Gandhi Airport at Delhi. I’d walked to this comfortable seating area along mile after mile of travelators set in wide walkways flanked by vast quantities of tropical greenery in matching planters.

It wasn’t the down-at-heel Delhi airport I remembered from previous visits. This 2010 reincarnation, however, was of the could-be-anywhere international variety. Indian it certainly was not. They have tried though to introduce personality into this magnificent, but somehow ordinary, structure by displaying, outside the brightly-lit, scrupulously-clean toilets, huge pictures of ladies and gents in various regional costumes. I had a pee in Kerala.

I’d just arrived on the overnight Virgin Atlantic flight from London, ahead of schedule thanks to a strong tail wind. Immigration and Customs formalities completed, I'd collected my suitcase and dropped it at the Jet Airways’ desk in readiness for my onward flight to Udaipur. A masala dosa and a small bottle of water later, I boarded a waiting Boeing 737 and, in little over an hour, was collecting my bag and being greeted by a pre-arranged taxi in Udaipur. Everything had worked like clockwork, just as I’d planned it.

My stay for the next three nights was at the Aashiya Haveli, the former home of a wealthy family, ideally situated on the banks of Lake Pichola between the Jagdish Temple and the City Palace, justly two of the most visited places in the city of Udaipur. A landing stage for boat trips around the lake was just a few paces from the front door. 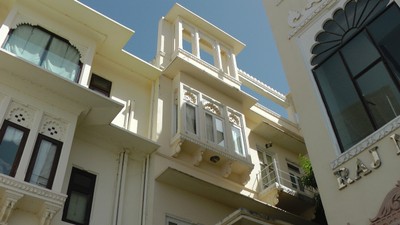 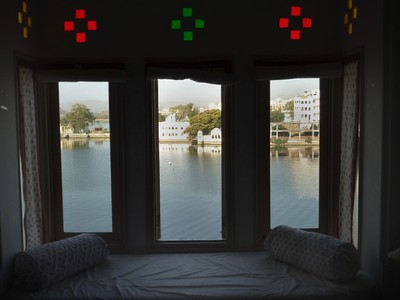 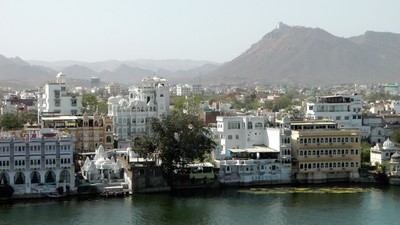 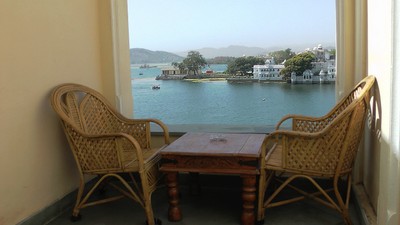 I’d been to Udaipur before – with my wife on a tour of Rajasthan almost exactly 15 years ago today. We’d both enjoyed the city then but Pat, not being a lover of spicy foods, poor hygiene and visible poverty, had not enjoyed India. So here I was again, on my own, on my umpteenth visit to the country that’s top of my list for see-the-world-before-you-leave-it experiences.

This particular visit was rather special. In brief, I was here this time for the marriage of a young man named Lajpal Singh whom we’d met near Ranakpur on our tour in 1997 and been in constant contact with almost ever since. To know more about our meeting, you'll need to read one of my first blogs - 'Life is like an ice-cream'. Lajpal’s known to his family and friends, by the pet name (nickname) of Pintu.

The marriage ceremonies – many and various – were to take place in Pintu’s home town of Sadri, near Ranakpur about two hours drive to the north of Udaipur, and in the bride’s home city of Jaipur, about six, seven or possibly even eight hours to the north-east of Sadri. The actual marriage knot was due to be tied at 6.17p.m. precisely on Sunday 11 March, the most auspicious time according to the astrological clocks of Pintu and his fiancée Rajshree.

I’ve just been recovering from the journey and unwinding in Udaipur, visiting the temple and the palace, of course, and I’ve wandered the streets soaking up the gaiety, glitter and grime that are so familiar throughout this land. 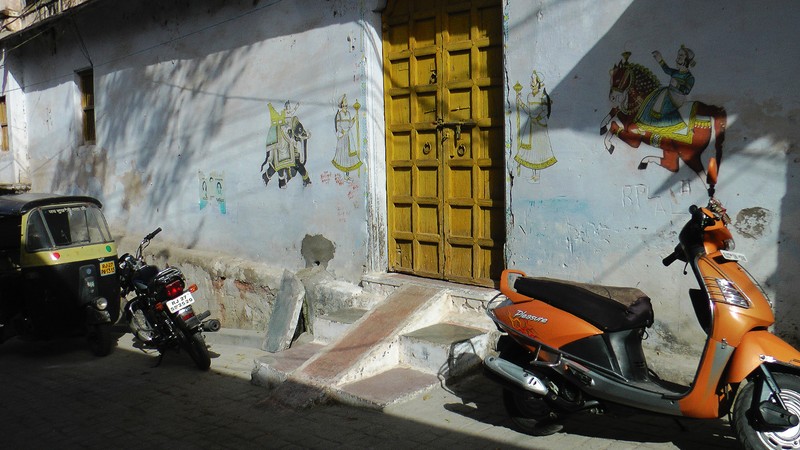 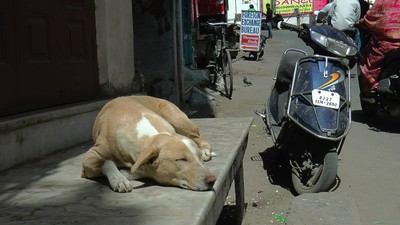 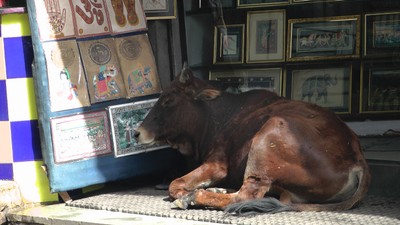 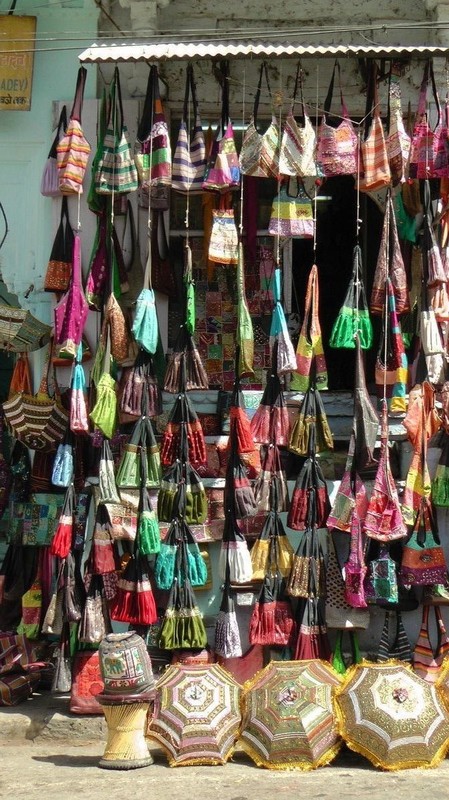 The Jagdish Temple was a fascinating insight into the religion of these people. Inside, a ceremony was taking place, accompanied by music and with women in colourful saris seated cross-legged on the floor or dancing in the aisle. A man, similarly seated just outside the entrance, prayed before moving off to walk clockwise around the temple building, where sadhus (holy men) and the unfortunate handicapped waited in anticipation of a few Rupees from pilgrims and tourists alike. 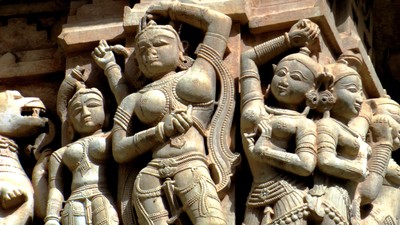 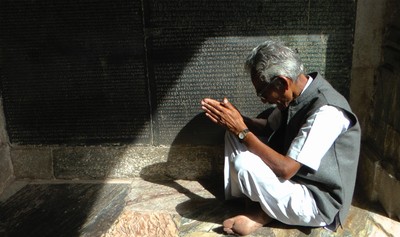 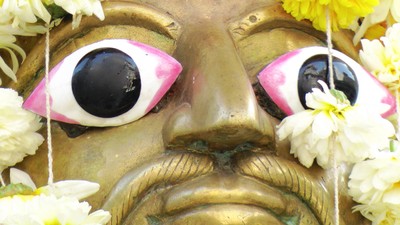 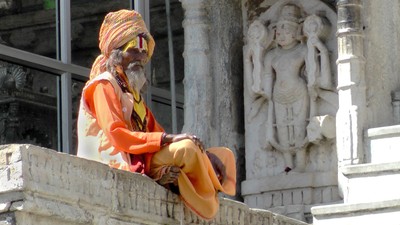 In the City Palace, now a museum (with an audio tour available if you wish), I was fortunate to spend time with Divya Bhatia, the royal family’s Art Director. He had recently worked with Alan Yentob to produce an episode of a British television programme related to the folk music of Rajasthan and was about to travel to England with Rajasthani musicians for a concert on 15 April at the Southbank Centre with renowned percussionist Pete Lockett. Meanwhile, here at the City Palace, he was masterminding an exhibition of paintings by three accomplished artists, one specialising in detailed miniature paintings, one who produced exquisite religious backgrounds to temple idols, and a third whose combination of classical skills created vibrant contemporary paintings. I met all three artists, unrelated but with the same family name of Sharma (a name handed down through a long line of artists), who were working together on a single painting that would combine their individual styles. Fascinating! 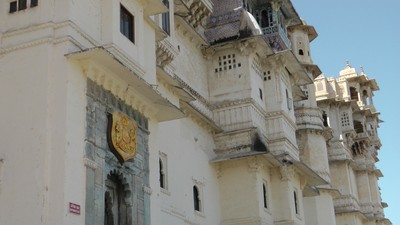 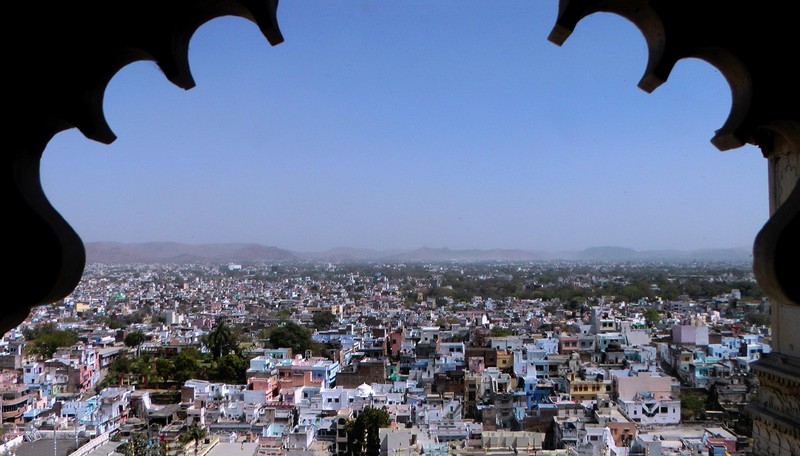 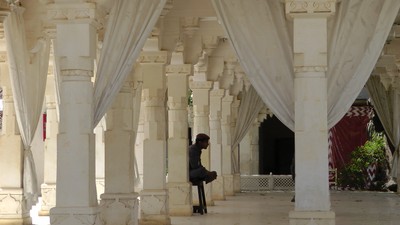 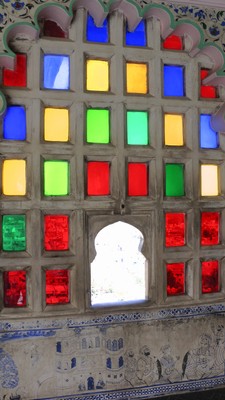 Some of my time though has been spent in my room at the haveli – the best one in this small hotel, with a window seat and a great view across the lake to the far shore and the Monsoon Palace atop a far distant hill. The Lake Palace Hotel, one of the Taj group’s super-deluxe properties, was just visible to my left and, beyond it, Jagmandir Island, with another gleaming white hotel popular as a wedding venue. The James Bond classic “Octopussy” was based here on Lake Pichola - as many of the hotels insist of reminding visitors with nightly performances of the film. 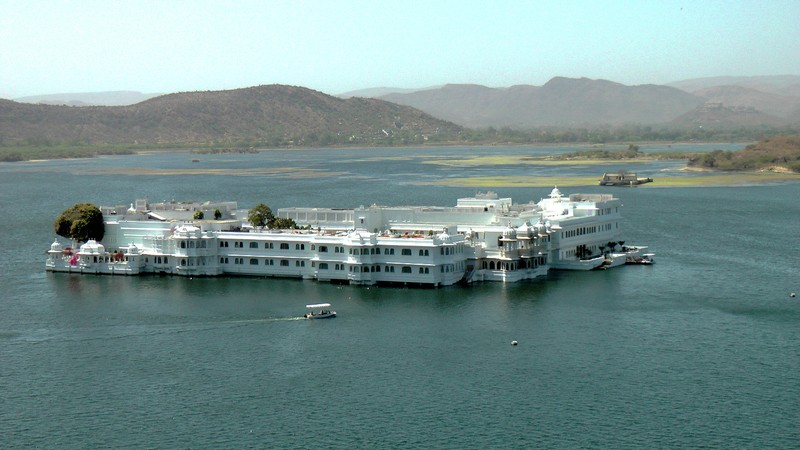 Large, brown Kites wheeled overhead. An occasional green Parakeet perched on a pole outside my window, and little boats with silent motors, shady canopies and tourists in compulsory yellow life-jackets scuttled along, leaving their wake in the otherwise calm waters. The only noises were the thud, thud of women on the lake-shore beating the hell out of their daily laundry and the occasional bark of dogs which seemed to spend most of their time fast asleep on someone’s doorstep. 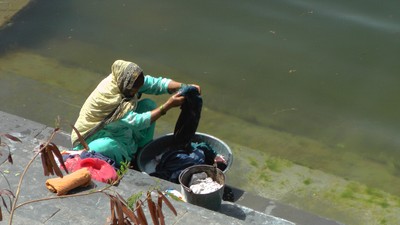 If this was a 'Best Exotic Marigold Hotel', I could be tempted to spend all my remaining days here.

Less than a hundred metres away, was the usual hubbub of everyday life: the ‘tuk-tuk-tuk, tuk-tuk-tuk’ of auto-rickshaws, revving of scooter and motorbike engines, and constant sounding of horns warning pedestrians, cows and other road users that they’re about to be mown down.

Next Table of contents