Fortunately, last evening’s hospitality ended in time for me to have a few hours’ sleep before one of the hotel’s faithful retainers, in khaki uniform and army-style maroon beret, knocked at my door shortly after four o’clock.

He saluted, placed a turban on my head, twirled the ends of his moustache, and marched me out of the hotel in pitch darkness to the accompaniment of drumming and singing from members of the hotel staff. For the next half hour or so, I was a diminutive Khuman Singh!

Near a giant banyan tree on the hotel’s approach road and in front of what I thought was a pile of thorny sticks, a puja was performed beneath the light of a propitious full moon. A coloured braid (a lacha or moli) was tied around my wrist by aforesaid retainer, and I reciprocated – making us ‘brothers’ - as he reminded me whenever I bumped into him subsequently.

I was asked to throw gulal (coloured powders), grains and pieces of coconut onto the sticks, then given matches to light a fire beneath them. In the darkness, I hadn’t appreciated that the pile of thorny sticks was actually at the foot of a mountain made up of a dead palm tree and other highly combustible materials. When it caught light, the whole thing went up in a ten-metre-high fireball. It was a Guy Fawkes’ Night bonfire unlike our usual damp offering. This one was tinder dry and, after an initial inferno that sent us all scattering, it was rapidly reduced to smouldering embers. 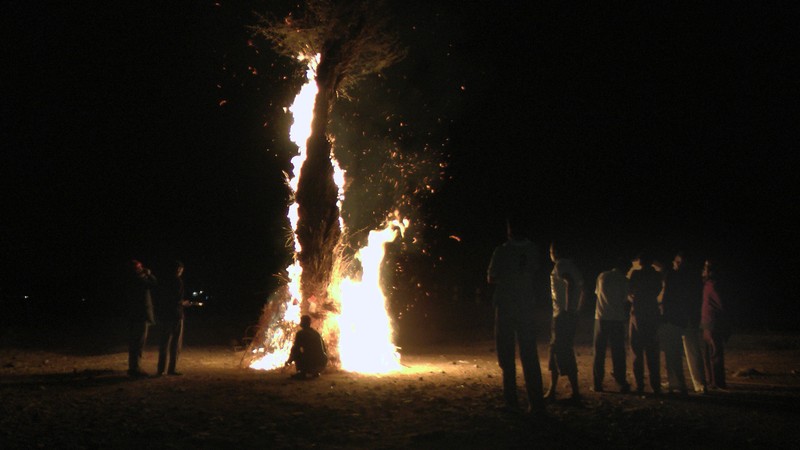 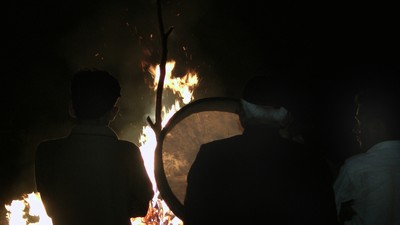 We returned to the hotel, still in darkness, to much joyous drumming and singing.

After what seemed like mere minutes, I was woken at eight o’clock by the massage man at his appointed hour. Then, suitably relaxed in every muscle, I wandered around the garden, firstly encountering two boys with drum and cymbal practising their noisy duet. 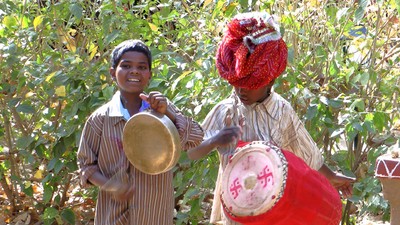 Ten minutes later, I heard their music, almost drowned out by raucous laughter, coming from another part of the garden. By the time I arrived to investigate, a group of French tourists had just finished throwing Holi colours over one another and were covered from head to toe in vibrant red, orange, yellow and blue gulal, as were the two musicians and their instruments. I’d narrowly escaped the same fate! 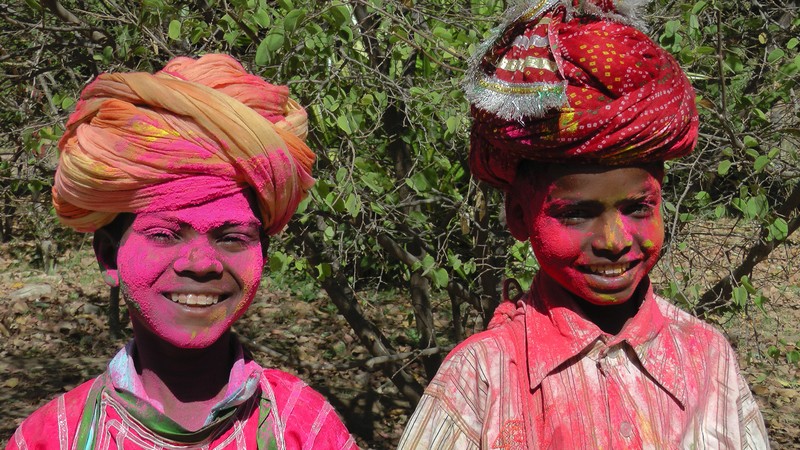 Pintu arrived shortly after, inviting me to lunch at his house. His mother and sister had prepared a delicious vegetarian meal, which Pintu and I ate Indian-style, cross-legged on the floor, while the ladies of the house to’d and fro’d with more chapattis, chutneys, water, tea...

Usually, the women might have eaten en famille with Pintu and his father, but tradition dictated that, as a visitor was present, they would only eat after we’d finished our meal.

Returning to the hotel, I caught up with my blogs. Later, I was having a short nap when Pintu reappeared. He had come to take me out on an excursion in a borrowed jeep to the venue for his pre-and post-marriage celebrations, the state-owned Shilpi Hotel, five minutes’ drive down the road from Maharani Bagh.

Pintu had had some elementary driving tuition as part of his Executive Officer’s training course some five or six years before. At the end of the course, without a formal test, he was given a driving licence - but he’d not driven again until just a few days ago.

We both laughed about how he'd received his licence, but the fact that India has the highest human road kill rate in the world was really no laughing matter. A driving test of some sort did exist, but obtaining a licence was more often a case of who you knew rather than what you knew, plus perhaps a few Rupees by way of thanks to the man issuing your licence! The poor state of most rural roads doesn’t help (although there has been some improvement in recent years), and cows, water buffalo and drivers of overloaded busses and lorries will probably never have any semblance of road sense.

Previous Next Table of contents