The deafening din of two-handed drumming and the beating of stick on pan-like cymbal will forever remind me of Indian marriages.

At the beginning and end of every ceremony - and, it seemed, at random intervals during every one of them too - these were the sounds that inevitably announced the arrival of bride, groom or guests. 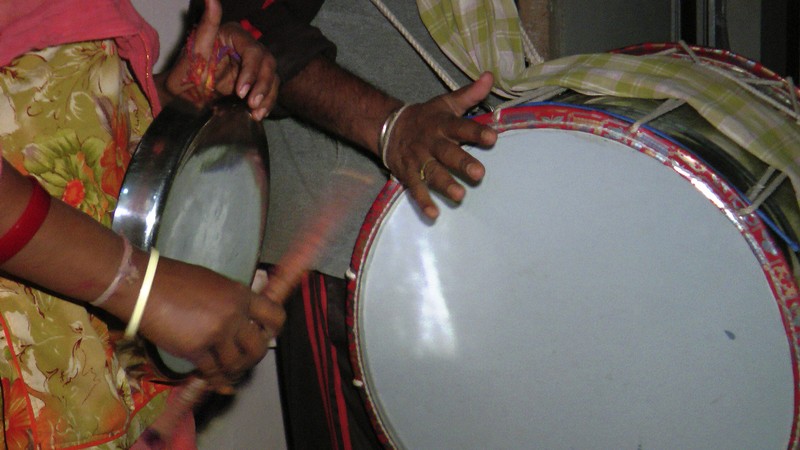 At around 10.30p.m. on Monday night, however, it was the comparatively subdued sounds of a drummer and an harmonium player singing joyous marriage tunes that greeted our arrival at the Hotel Shilpi after the long and dusty journey from Jaipur. 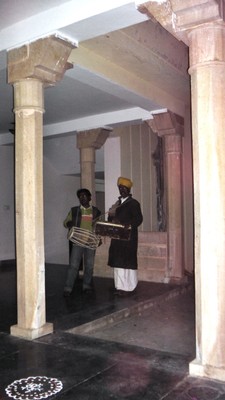 Don't be fooled though - they were soon augmented by the booming big bass drum and catatonic clattering cymbal!

We whiled away our time drinking hot, sweet, milky tea and in conversation, much of it in stilted Hindinglish with Pintu's aunts, uncles and cousins, and in occasional Franglais chats with Hitesh, one of the photographers, who was a year into studying to become a French tour guide.

The ladies were dressed in beautiful saris of reds, pinks, yellows, blues and greens with matching veils, all elaborately decorated with sparkling gold and silver trimmings. Many of the men wore splendid turbans, their colour and style varying according to the status of the person on whose head it sat. The children, wide-eyed even at this late hour, excitedly awaited arrival of the main event.

Shortly before midnight, Pintu's new Maruti/Suzuki Swift, adorned with festive ‘just married’ pink ribbons and ably chauffeured by one of his many cousins, approached up the hotel's illuminated driveway. Out stepped the happy couple to the boisterous rhythm of drum and cymbal and the obvious delight of the waiting crowd. The couple wore their finest robes and were greeted with smiles and ritual ceremony - a red tilak between their eyes and the touching of a coiled silver item to their shoulders in turn. 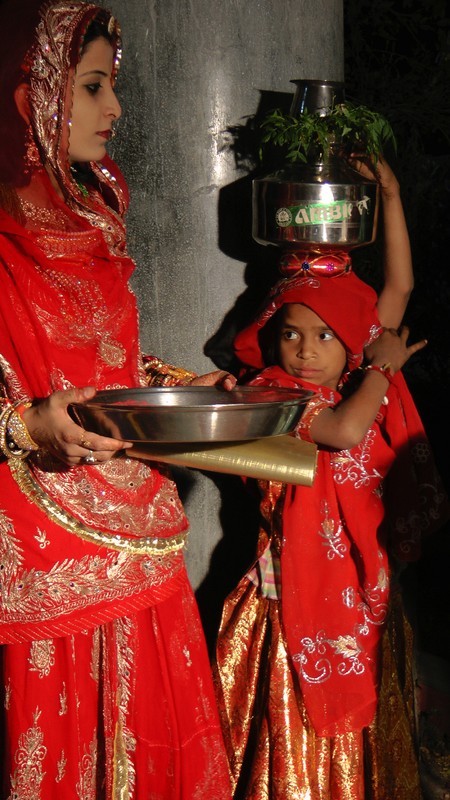 A tray of stunning gold jewellery decorated with pearls and precious stones, a marriage gift from Pintu, was presented to Rajshri. Then, to whispered instruction given by the ladies, Rajshri stepped bare-footed into a tray of red dye and onto a waiting gold cloth, leaving behind bright footprints.

A traditional game followed, with Pintu using the tip of his sword to move a set of trays that had been set down on decorative circular designs delicately painted on the terrace floor. Each tray contained what appeared to be a chapatti with a red spot in the middle. Rajshri had to repeatedly gather up the misaligned trays without making a noise; if there was the slightest sound, the ritual had to start all over again - which, of course, it did, numerous times. 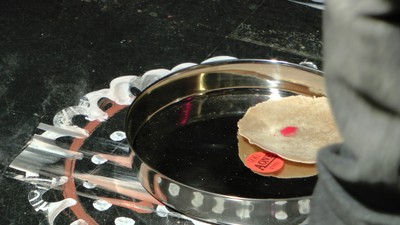 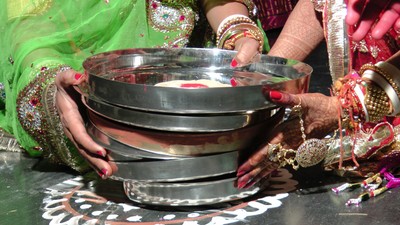 Having successfully completed the game, Rajshri, her face still veiled, received another gift of superb gold jewellery, this time from Gajendra, Pintu's mother.

Throughout, there had been constant drumming and banging of cymbals, playing of harmonium and out-of-tune singing, loud chatting of excited relatives, and children running around, noisily trying to gain the best viewpoints for all the ceremonies and games. 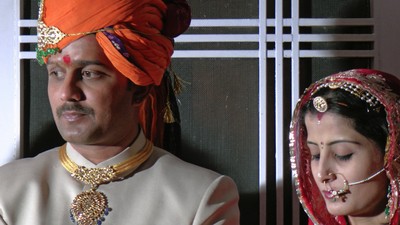 Pintu took a moment's rest to chat and pose for photos with his sister Purnima (above) before the gathering moved indoors to the room with the temporary shrine to Ganesh, previously used for Pintu's pre-marital ceremonies. The volume of noise reduced noticeably while a puja was performed and Pintu and Rajshri once again fed small amounts of white rice to each other. 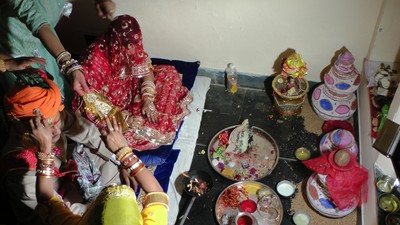 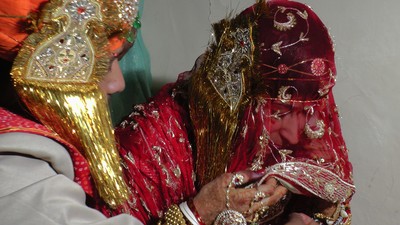 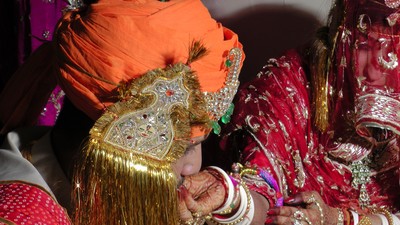 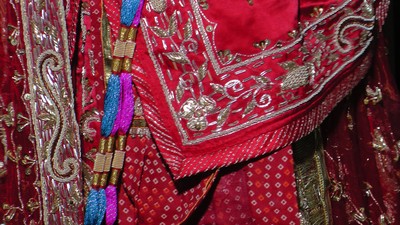 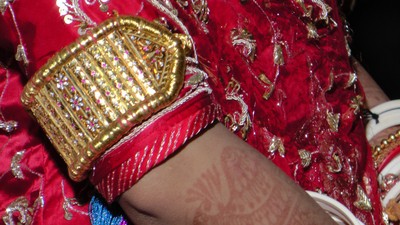 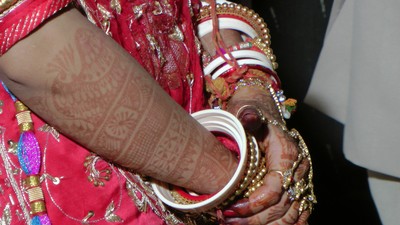 Then, back outside, the decibel level increased once again with a bass drum and ear-splitting cymbal. Relatives, including some of the children, fed fingerfuls of rice to the bride and groom and, as custom dictated, waved 10 Rupee notes around their heads before leaving them at the bride's feet. 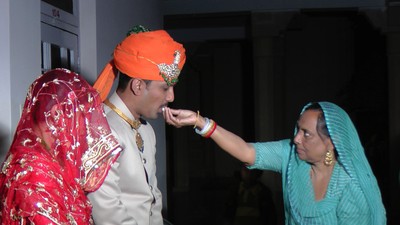 It was after 1.00a.m. when the last ceremony took place and everyone was exhausted after what had proved an extremely long and tiring day. The bride and groom retired to separate rooms.

Early on Tuesday morning, I was a few minutes late reaching the Hotel Shilpi - and, unfortunately, just missed Rajshri performing a traditional new bride's dance. I hope to get some video footage from the friendly photographers. I was, however, in time to participate in a small ceremony where Rajshri received gifts from others, including my own of English money and a map of London for her and Pintu to use when they spend their honeymoon with us in Welwyn Garden City in a few months' time. This she reciprocated with a small pink envelope containing a token amount of money and with Hindi script on the outside that I took to be words of thanks.

I returned to the Maharani Bagh, where later I received a telephone call from Pintu to tell me that his younger sister, Purnima, had been taken suddenly and seriously ill; she was in hospital with suspected malaria. After lunch, he called again to confirm the feared diagnosis.

The next two days of my stay here were something of a blur - a mixture of hours spent blogging and daydreaming on the terrace of my cottage at Maharani Bagh to the calls of a thousand unseen birds, a repeat visit to the fabulous Jain Temples at nearby Ranakpur (pictured below), tasty buffet lunches at the hotel, a tour of the kitchens and a lesson in how to make masala chai (sweet, milky, ginger and cardamom tea) from Maharani Bagh's head chef Chattar, and very enjoyable dinners as a guest of Pintu's parents, Ranveer and Gajendra, at their home in Sadri. 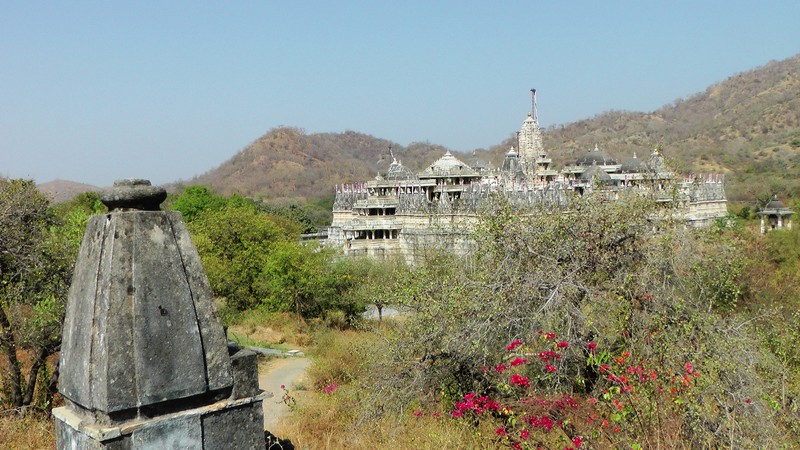 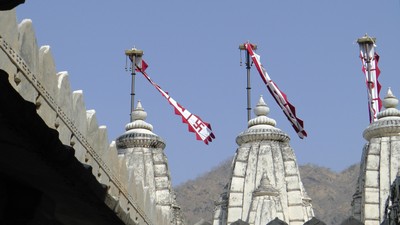 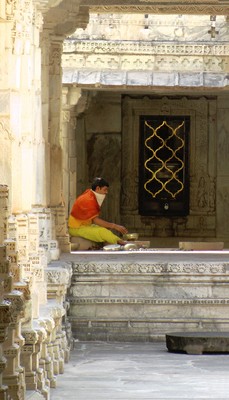 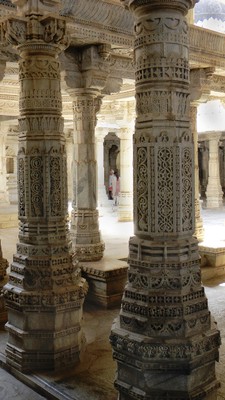 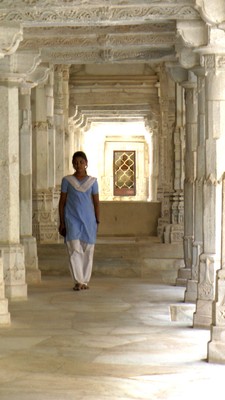 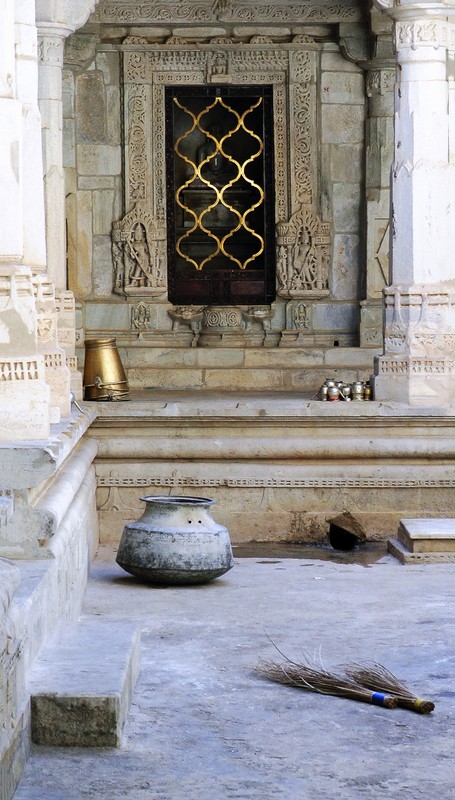 This was all rather overshadowed, of course, by the worry of Purnima's health. She'd looked fabulous throughout the marriage ceremonies - you only have to glance at the photos to understand what I mean. When I saw her on Tuesday evening, however, she was a mere shadow of her former self. I'll spare you the gory details of sunken eyes, severe vomiting, and the like - suffice to say Pintu had to leave dinner to take her back to the hospital for further treatment. On Wednesday, she'd improved a little but was still incredibly weak and, at lunchtime on Thursday, she was only just starting on the road to recovery. (I'm pleased to report that, about a week later, her condition improved sufficiently for her to go home to be with her husband Dilip in Jaipur, where she continues to recuperate.)

Thursday morning saw me repacking luggage before going to lunch with Pintu at his parents' home. Here I was able to also spend a little time meeting Rajshri - at long last! She and Pintu now shared a room in this house, only for a few days though as Rajshri had to return alone to Jaipur to organise her younger sister's marriage on 1st April. After that, they planned to live in Pintu's quarters at his municipal office complex in Deogargh.

Although Rajshri clearly understood every word I said, her shyness meant it proved a rather one-sided conversation. Well, custom dictated that new brides had to be demure - plus, we'd never met before and I was a foreigner three times her age, so she was certainly entitled to be shy. She does have lovely eyes and a great smile though!

I left Sadri with much sadness, thanking Ranveer and Gajendra for their wonderful hospitality and, as is their custom, receiving a suit-length of cloth from them as a farewell gift. I'd already given them a small gift to show my appreciation for being allowed to attend this joyous occasion. I had known their son for more than half his young life and had grown to understand him so well that I often referred to him as 'my Indian son'. I have to confess, however, that I sometimes find his way of life difficult to understand - his total loyalty to his family above everything else, his firm religious beliefs, and his strict adherence to Rajasthani customs, all admirable qualities, all so strange compared to how our life is lived here at home in England.

My brief return to the Maharani Bagh to collect luggage was like leaving old friends too. Virtually all of the hotel's staff were there to bid me farewell - Chattar the chef, Keval the massage man, and all the others whose names I either never knew or had forgotten: my 'brother' the night-watchman with twirled moustache, the receptionist with his excellent command of English, the waiters, the boy and his dad who beat a drum and bashed a cymbal whenever new guests arrived, and last but by no means least: my great friend and hotel boss, Khuman. Thank you, Khuman, from the bottom of my heart for your friendship, your help and your overwhelming hospitality.

My biggest 'thank-you', however, must go to Pintu, without whom I would never have had the privilege to see India through Indian eyes. You have introduced me to your life and the lives of your family. You have shown me respect and hospitality beyond imagination. By your example, you have illustrated how your country's younger generation respects its elders and its traditions. In all, you have opened my mind to a culture whose existence would have been unknown to me. Thank you. You'll make a great husband. Rajshri will make a great wife. Together, you'll make a great family.